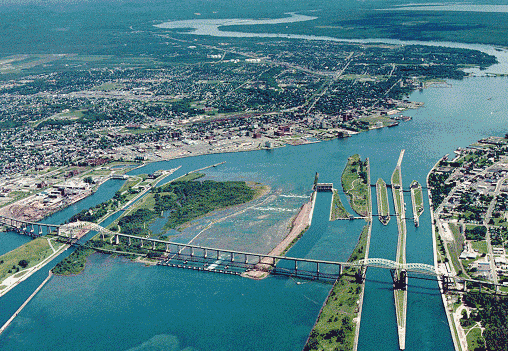 Meet Jean-François Cantin. He’s a civil servant who heads hydrological operations (east)  for Environment and Climate Change Canada. He is based in Quebec City.

Meet Major General Mark Toy. He’s the commander of the Mississippi Valley Division of the US Army Corps of Engineers, responsible for water resources engineering in a 370,000-square-mile area, extending from Canada to the Gulf of Mexico. He is based in Vicksburg, Mississippi.

Together, they chair the International Lake Superior Board of Control (ILSBC), an agency of the International Joint Commission that manages the Great Lakes for Canada and the United States. Cantin and Toy and their colleagues have the job of regulating the outflow of Lake Superior and managing the hydro control works on the St. Marys River at Sault Ste. Marie.

If you’re a Lake Michigan or Lake Huron cottager or business owner, if you’re a fish spawning or a bird breeding in the productive wetlands of Georgian Bay, the decisions made by this board may already have had a major impact on your life. Or are likely to.

The Wasaga Beach Men’s Probus Club recently heard from Mary Muter, vice-chair of Restore Our Water International, which has sent a strongly worded letter to the IJC, noting that lake levels now exceed the “crisis conditions” defined by the commission’s own 1993 Levels Reference Study – and it’s time to implement the 1993 Crisis Response measures outlined in the forward-thinking report.

But that’s not happened.

“The ILSBC has consistently favoured Lake Superior interests in lieu of impacts on the lower lakes,” says the November 22, 2019 letter from Roger Gauthier, chair of Restore Our Water International. “This unfair treatment needs to stop now.”

There’s nothing natural about the range in fluctuation of water levels on the Great Lakes – which managed themselves quite well until a century ago when humans started channelling and canalling and damming and fiddling with the flow of water.

Research by Patricia Chow-Fraser of McMaster University has shown that wetlands suffer if the difference between high and low water levels during a year exceeds 5.5 feet.

Two of the Great Lakes are managed by boards of control. One is Lake Superior, which has an artificially imposed range of four feet, thanks to the outflows into Lakes Michigan-Huron. The other is Lake Ontario with a range of 5.5 feet. Lakes Michigan-Huron (and Georgian Bay) are subjected to a range of 6.5 feet, now moving toward 7.5, Muter says. And the wetlands, pushed up against a granite shoreline, are shrinking, their submerged vegetation converting into harmful algae. A huge biodiversity is at risk.

Aggravating the situation are the Long Lac and Ogoki diversions, undertaken in 1940 to increase Canada’s electricity supply during World War II. They diverted water from the Hudson Bay watershed into the Lake Superior basin, increasing the power of the flow through the St. Marys River.

Another recent issue is an apparent decrease in the “conveyance” of water from Lake Huron through the St. Clair River. Muter showed the Probus Club members aerial photographs indicating “sand tongues” are moving downstream along the river bottom, clogging the flow.

While water levels in Lake Superior and Lake Ontario are controlled, there’s no board to manage Lakes Michigan-Huron. Whatever happens as a result of the Lake Superior control board decisions – well, it just happens.

The IJC has not responded to, or even acknowledged the letter from Restore Our Water International, Muter told the Probus Club meeting.

In fact, she said,  they have done the reverse of what is needed to protect Lakes Michigan-Huron from high water levels, choosing instead to prioritize navigation and power generation.

“They’re very proud of the fact that they’re discharging excess water from Lake Superior to keep within that four-foot range and make sure that there’s no interruption of water into the hydro power generators,” Muter said.

The 1993 Crisis Response measures referred to in the Restore Our Water International letter include decreasing inflows from from the Long Lac and Ogoki diversions, increasing outflow through the Lake Michigan diversion at Chicago and installing ice booms in the St. Clair River.

Probus members questioned Muter on who benefits from the actions of the Lake Superior board. “Who’s profiting?” one man asked.

“You’re asking the right questions,” Muter answered, “but in three years I was on the (IJC) public interest advisory group… I was never able to get to the bottom of it. I for instance asked right at the very first meeting of the public advisory committee, ‘Can we see the budget?’ and they said ‘No, we’re not going to let you see the budget’.”

She added: “There’s politics and money and people kept telling me that, but to get to the bottom of that in the US, it’s not easy.”

Restore Our Water International is calling for a single control board to manage all of the Great Lakes as a unit. Because it’s no longer acceptable for the International Lake Superior Board of Control headed by Contin and Toy to make decisions that have devastating impacts downstream – with no input from downstream.

“We are the forgotten part of the Great Lakes,” Muter says. “That has to stop now.”

This is the second in a two-part series on the Great Lakes. Last issue: Grass Carp lurk where politics muddies the waters.